Mrs. Shannon Goley of Sayreville is a nursery teacher by day and an after-hours cookery connoisseur. She has been selected to be part of a face-off with pizza on the Drew Barrymore Show for National Pizza Day!

“Another One Bites The Crust,” is the segment Ms. Shannon will be featured in, and it’s scheduled to air January 24th! She is ready to amaze the country with her cooking skills!

Ms. Shannon deserves the spotlight here for a few reasons:

No wonder she was selected for such a showcase, and with Drew Barrymore of all people… (ET, 50 First Dates, Never Been Kissed, Charlie’s Angels, and now her Drew Barrymore Show…) it’s a BIG deal for a teacher from Sayreville to step on that stage!

Looking only at the meals Mrs. Shannon cooked in her class at Sayreville School, her students go home ranting and raving about them! Through her gardening and harvesting lessons, she teaches children about ingredients, food preparation, and the value of taste. The same principles are taught to the children she mentors through a private cooking program. 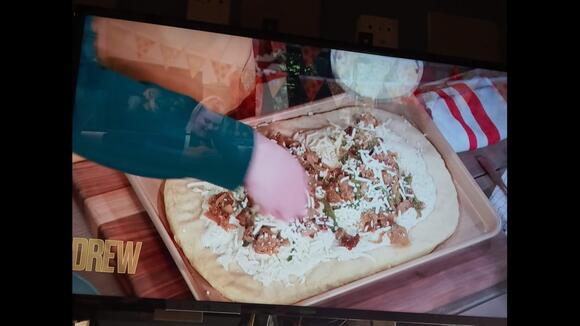 Sayreville is SO proud of Ms. Shannon Goley! She has taught hundreds of students one of life’s most valuable skills: cooking. The entire city is behind her in whatever she decides to do after her with her talent!

Read on to find out what the Sayreville celeb has to share about her experience on The Drew Barrymore Show and what will be next in her cooking career after this stunning triumph! Even though she didn’t win, she earned her place on that stage!

“I am currently a preschool teacher and a children’s cooking instructor. For the past six years I have taught cooking to children aged 7 to 12. The school I work for is a franchise so we can’t choose the recipes ourselves, but we make everything from egg soufflés to chocolate cupcakes to fresh pasta! Teaching has always been my passion and I’ve been interested in cooking since I was in high school so teaching cooking classes is a no-brainer!

Last year, a reservation maker emailed my culinary school manager looking for people for a cooking competition. I contacted the producer of the reservation and interviewed him, but I was not chosen for that particular segment. The reservation producer loved my personality and told me he would bring me into a future segment. Lo and behold, a year later, he reached out to me and asked if I’d be interested in doing a pizza one-on-one. I interviewed her again and then moved on to an interview with one of the producers on the show. I had to explain my pizza recipe – Salsiccia Alfredo Pesto Pizza! I start with a homemade dough and a homemade alfredo sauce. Alfredo sauce has two types of garlic, cream cheese, and my secret ingredient: Italian seasoning! Then, I spoon-fed the peppers, onions, and sausage over the alfredo sauce. I sprinkle both mozzarella and parmesan. Finally, I season with a little pesto. I submitted my recipe to the show and then, a few days later, it was confirmed. . .I was booked to appear in the segment titled “Another One Bites the Crust.” The segment is part of an hour-long pizza episode for National Pizza Day.

On the day of registration, I arrived at CBS studios in the city. The show took me to my green room! So, we did a quick test run before the actual recording. Everyone I met was super friendly! Being on the show is probably one of the coolest things I’ve ever done! Surprisingly, I wasn’t nervous at all…it all came naturally to me and I was back on television in no time at all. The pizza I honestly made came together one day as I was experimenting with leftovers in my kitchen. In the future, I would love to partner with a company, brand or restaurant to create new and exciting food options!

The air date for this particular episode is January 24th. My segment will air in the second half hour of the show, which airs late night in the New York area. Check thedrewbarrymoreshow.com and enter your postcode in ‘where to watch’ for the exact channel and broadcast time.